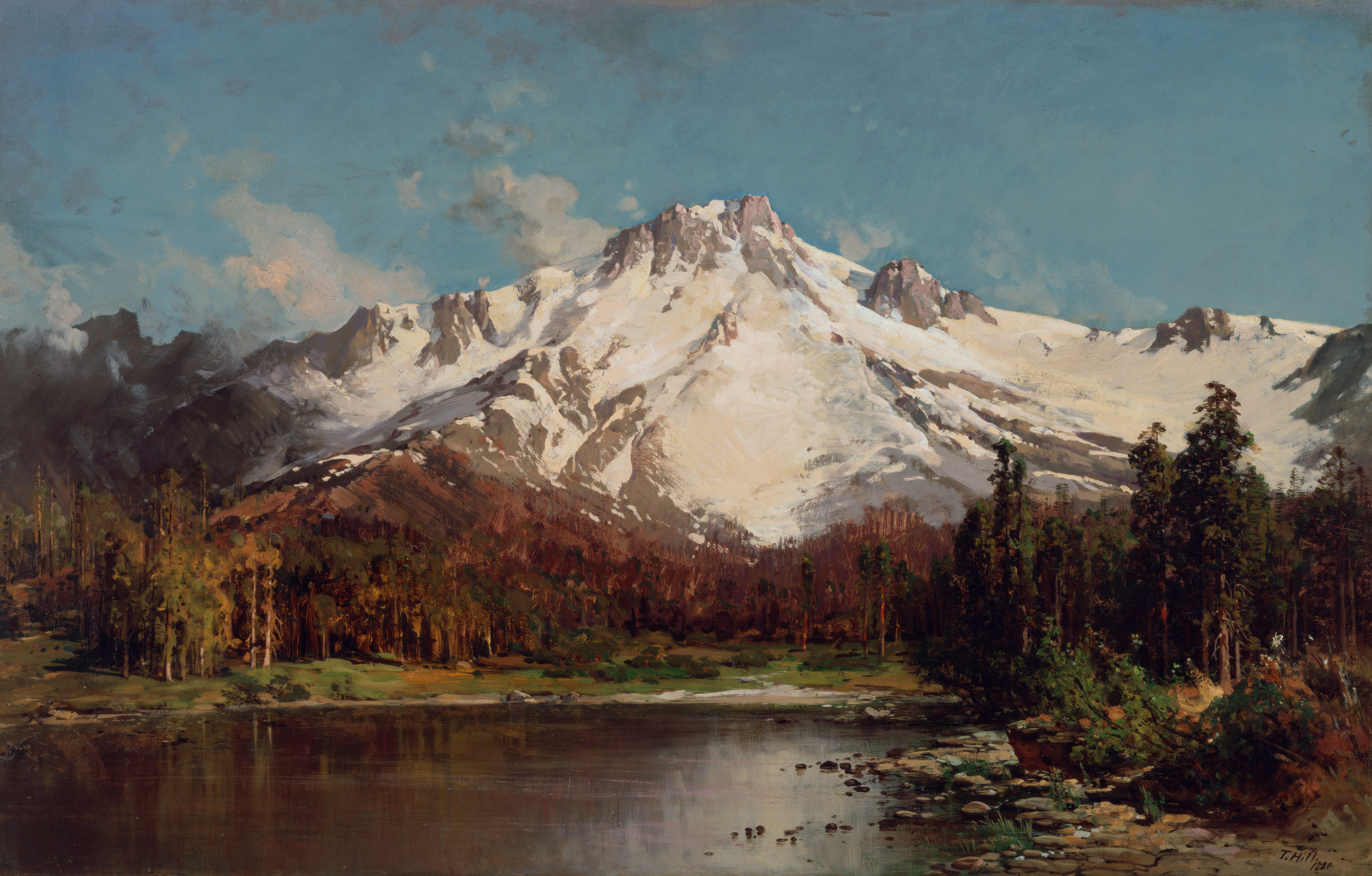 How do you think the world sees California?

Hill settled in San Francisco in 1861; he made his first trip to Yosemite Valley in 1865 with painter Virgil Williams and photographer Carleton Watkins. Throughout his career he explored California’s natural scenery, making oil sketches that he later developed into finished paintings. Those works played an important role in shaping public perceptions of California in an era when the state remained otherwise inaccessible to most Americans. 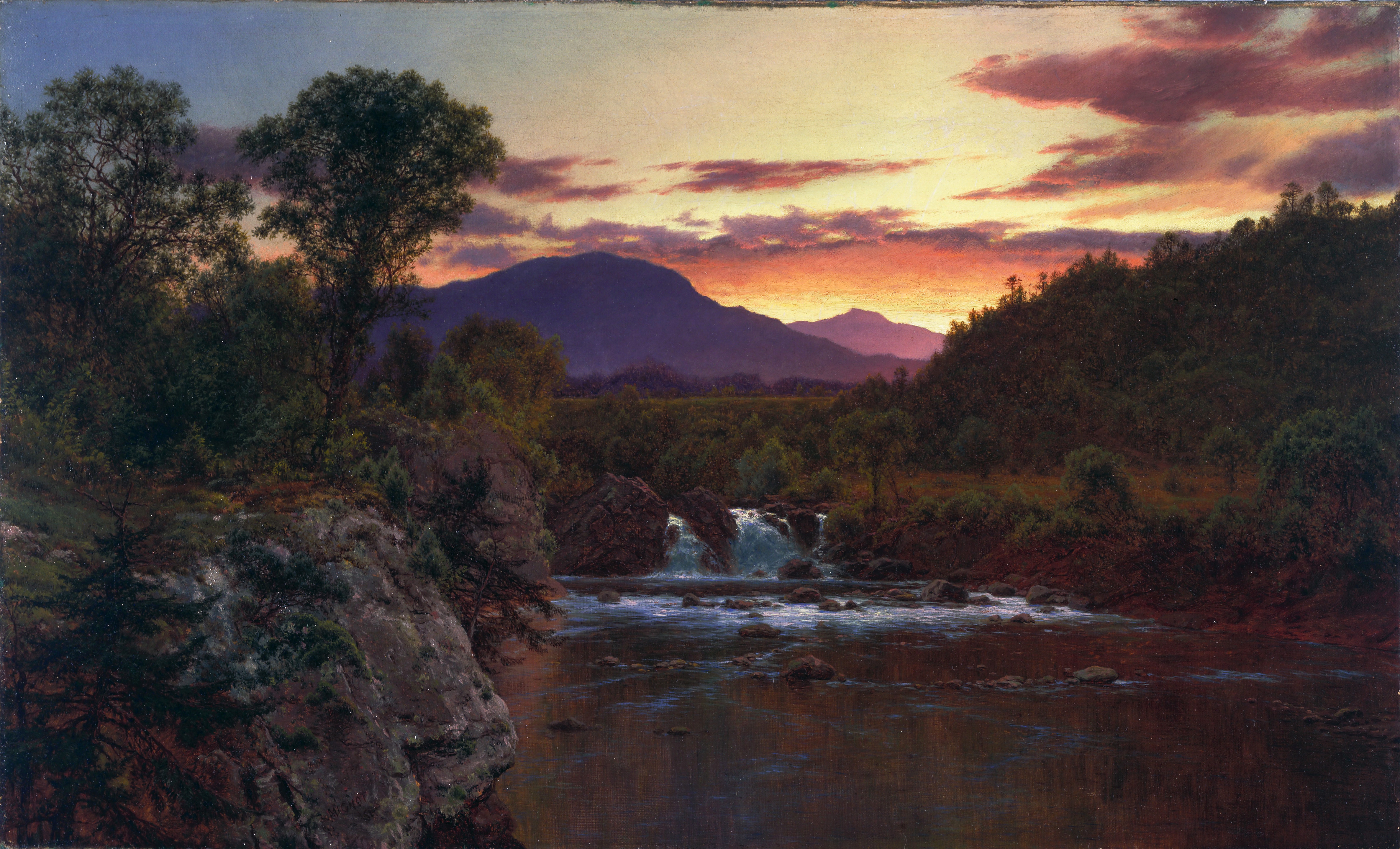 How does this painting show the passage of time?

This painting is one of Mignot’s few North American scenes. “The artist has dipped his brush in the ‘colors of America,’” one contemporary critic observed. Another, responding to Mignot’s 1876 memorial exhibition, wrote: “His skies are very remarkable. Sunsets would seem to have been his delight; and no wonder, for his facility for representing upon canvas the delicate and beautiful tints produced by the rays of declining light illuminating the fringy edges of clouds, is perfectly marvelous.” 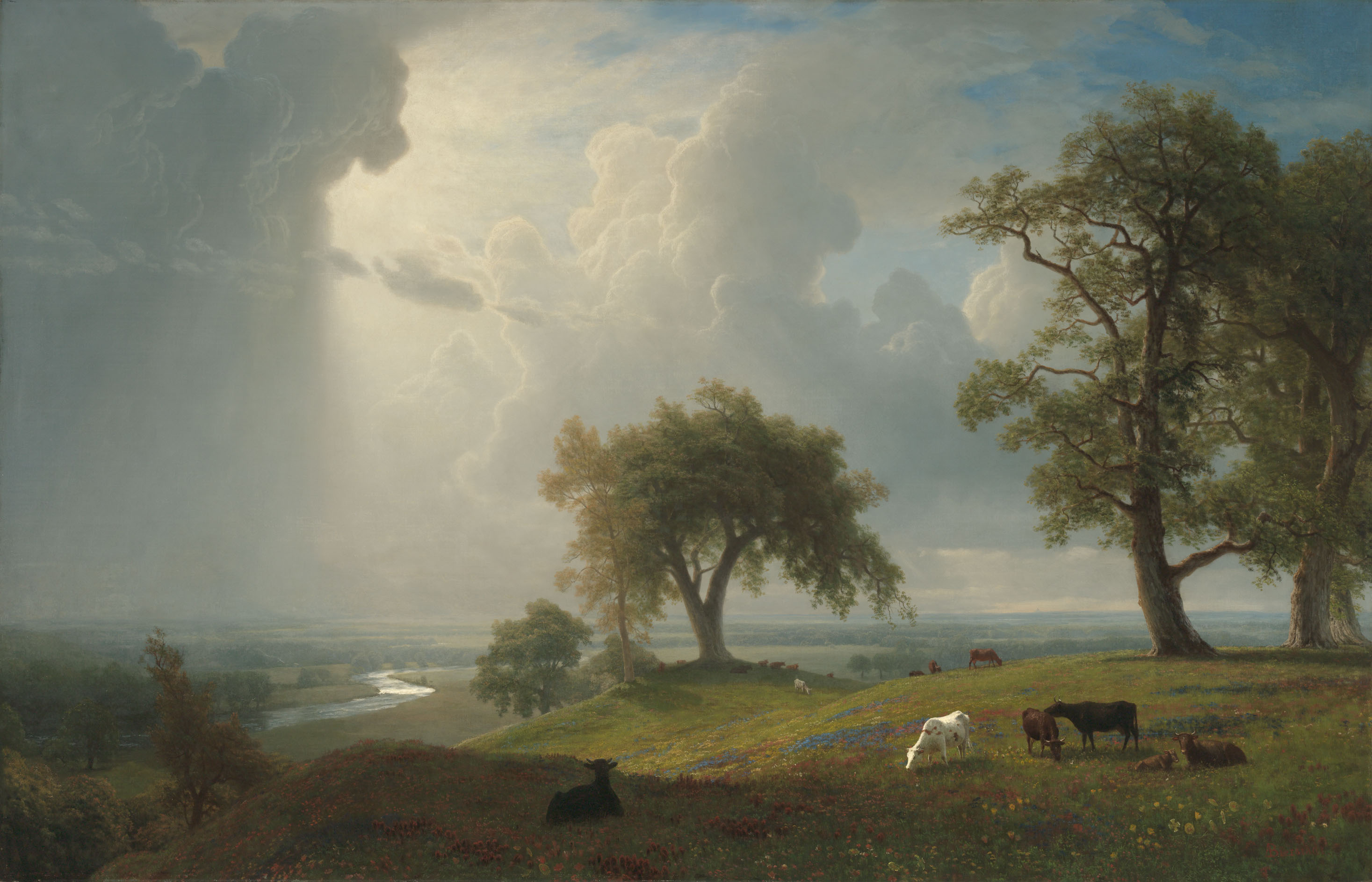 Can you imagine the California of the past?

Bierstadt’s bucolic landscape offers an idealized image of the West as a new American Eden. Cows graze in a broad expanse of fertile fields, open and waiting to be settled. This lush view of the Sacramento River Valley would have convinced viewers—and potential settlers—to come to California. This scene was painted from studies made during Bierstadt’s third western sojourn, when the artist and his wife, Rosalie, traveled to San Francisco on the recently completed transcontinental railroad. 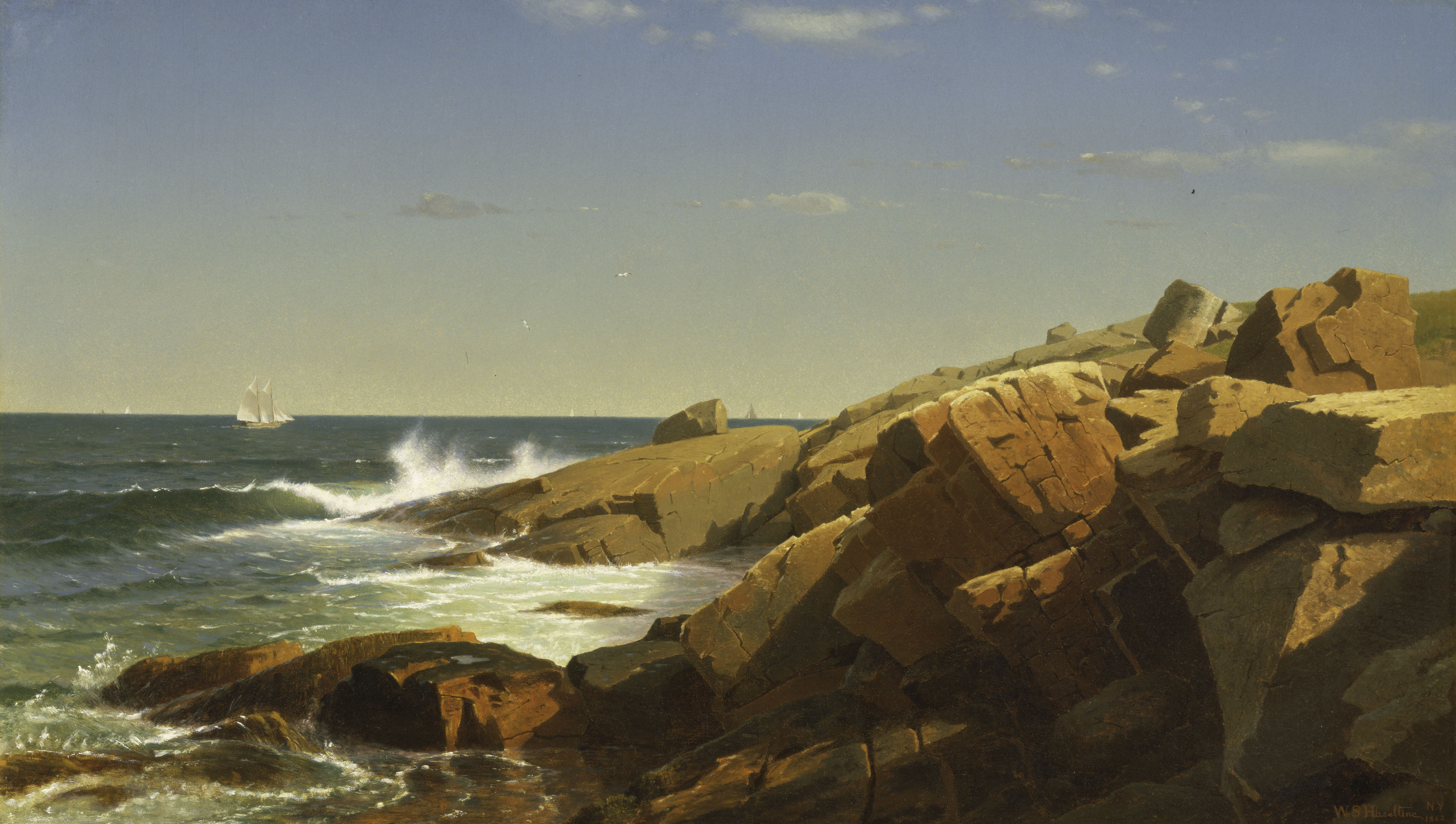 What would you hear, smell, and feel from this location?

During the American Civil War, Haseltine traveled repeatedly to the rocky coastline of New England to sketch the sea and shore that appear in his strongest works. In this painting, waves rise up from the blue sea, turning green as they stretch toward the sky and crash upon the orange rocks. The painting’s horizontal emphasis and bold light lend a calm timelessness to the scene, prompting one critic to praise “these noble rock portraits set in the deep blue crystalline of the sea.”

Our Banner in the Sky 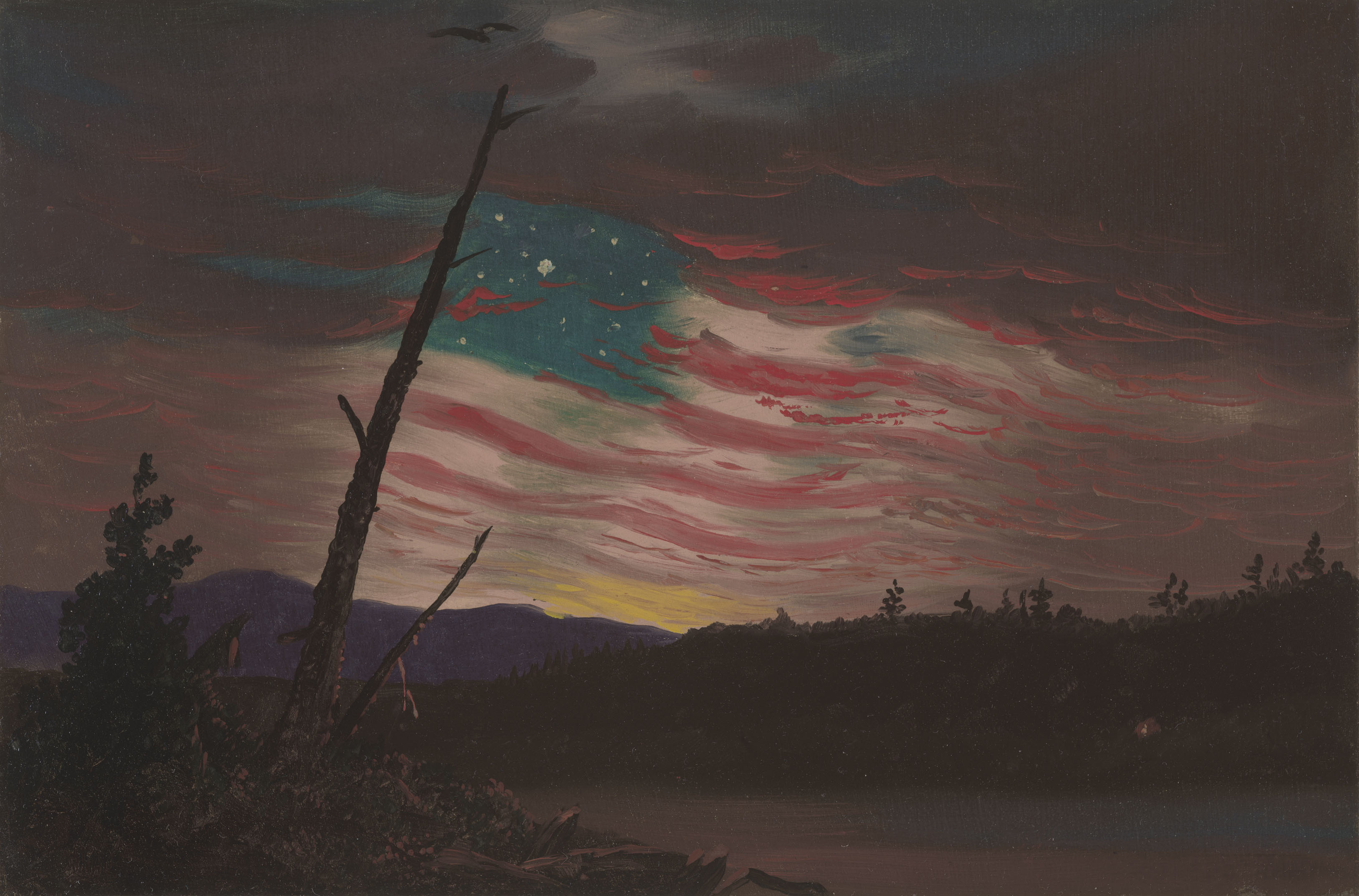 What is the difference between patriotism and propaganda?

This painting, based on an earlier oil sketch by Church, was inspired by the first military engagement of the American Civil War—the bombardment and capture of Fort Sumter, South Carolina, by Southern forces in April 1861. Fort Sumter’s battle-scarred American flag quickly became an important propaganda symbol for Union army recruitment. Here, Church symbolically resurrected the flag over the Northern landscape that served as the favored subject of the Hudson River School artists.

View Near the Village of Catskill 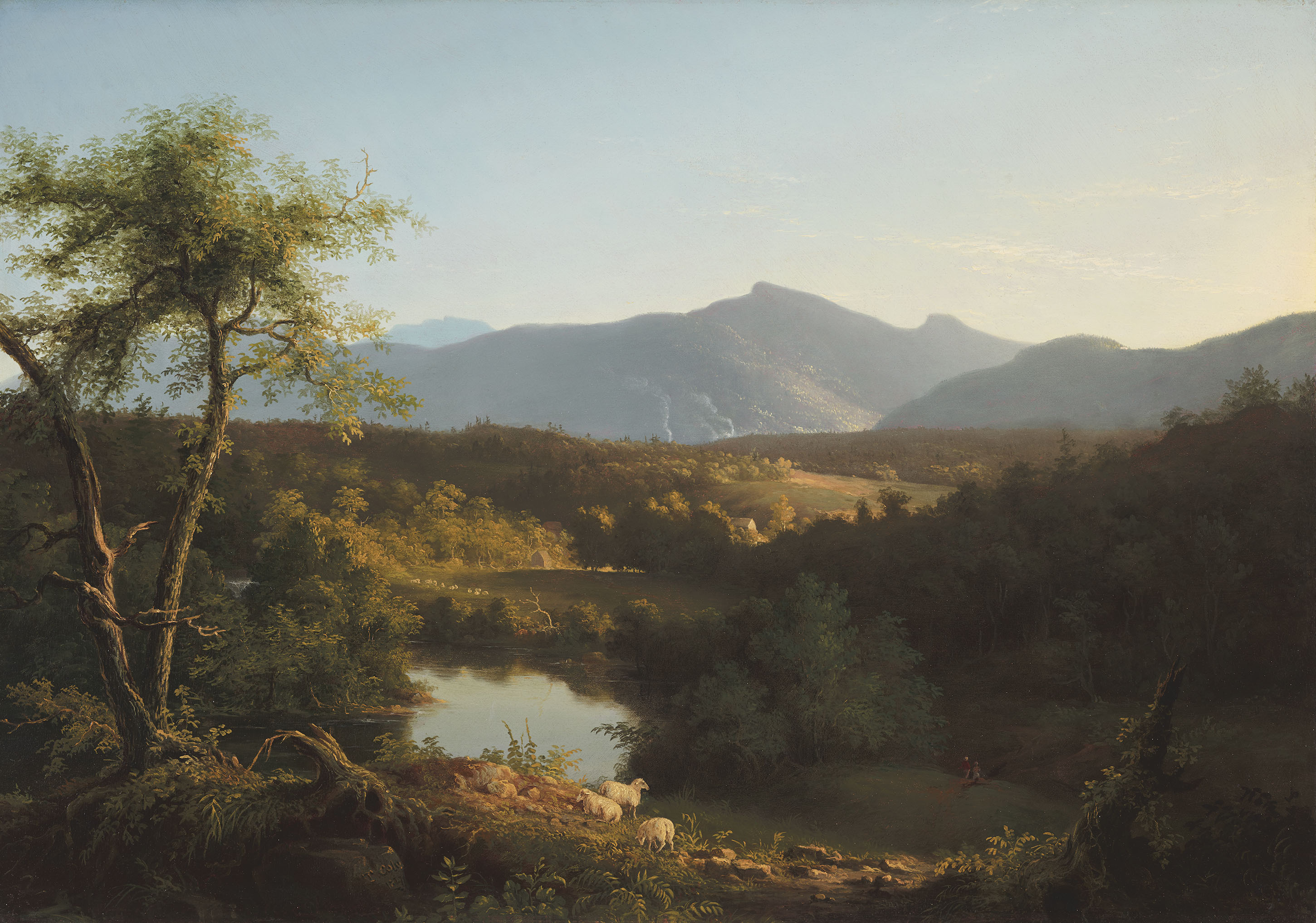 What do trees symbolize in your life?

This scene looks toward the Catskill Mountains from the New York village of Catskill, a view that Cole first sketched in the summer of 1825. The composition is stagelike, with its central body of water, distant mountains, and luminous atmosphere. The robust tree next to a dying stump in the foreground represent the cycle of life and death, demonstrating Cole’s aesthetic philosophy of endowing landscapes with symbolic significance and showing a harmonious balance between nature and settlement.

A Broadside of Mount Tamalpais 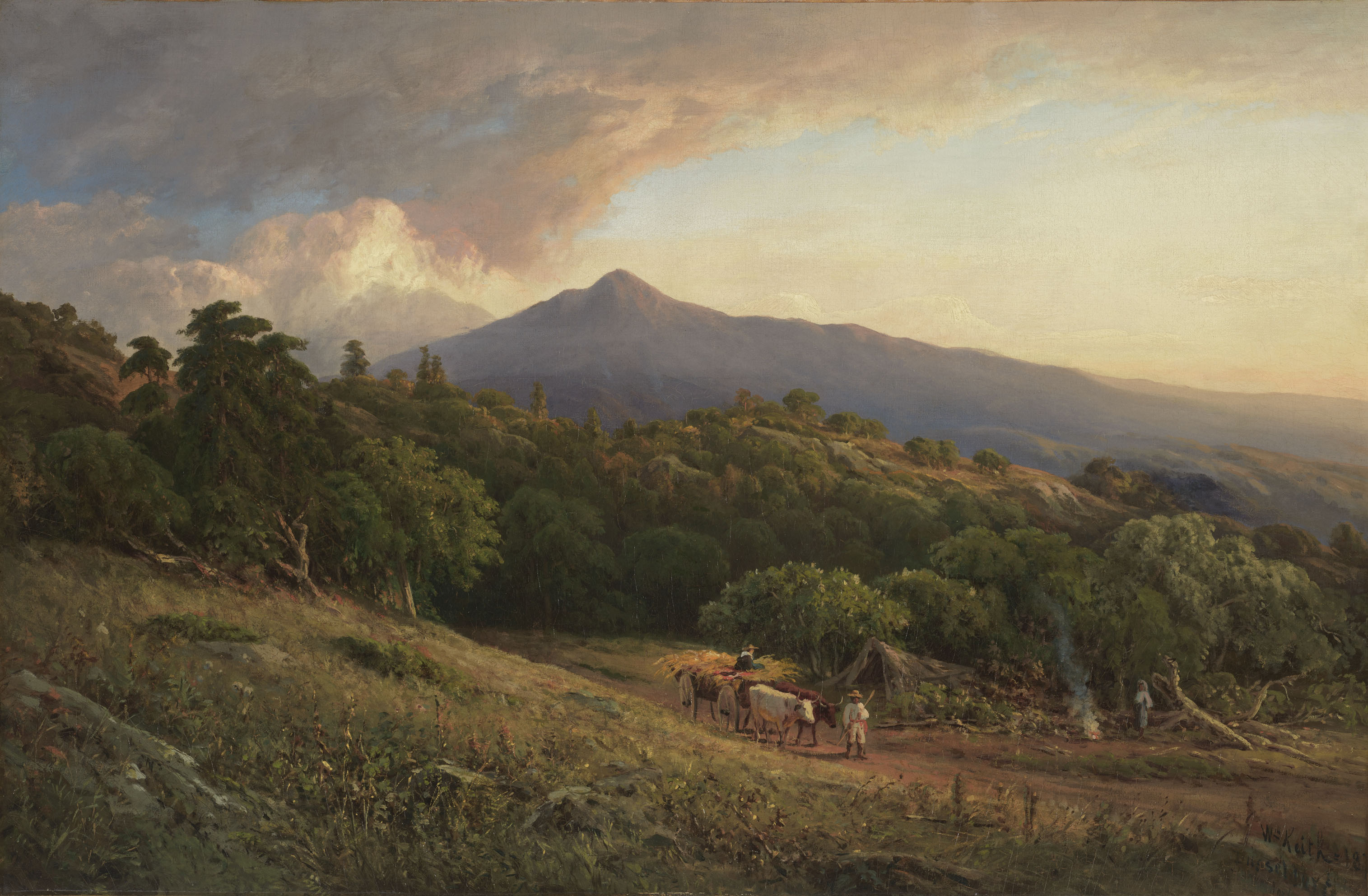 What makes a landscape memorable?

Mountain scenery was a subject popular with both European and American artists. Keith here depicted Mount Tamalpais, in Marin County, north of San Francisco. When this painting was exhibited in New York, a reviewer for a San Francisco newspaper favorably described the landscape as demonstrating “entire unpretentiousness, freedom from affectation and from strange and startling effects.” 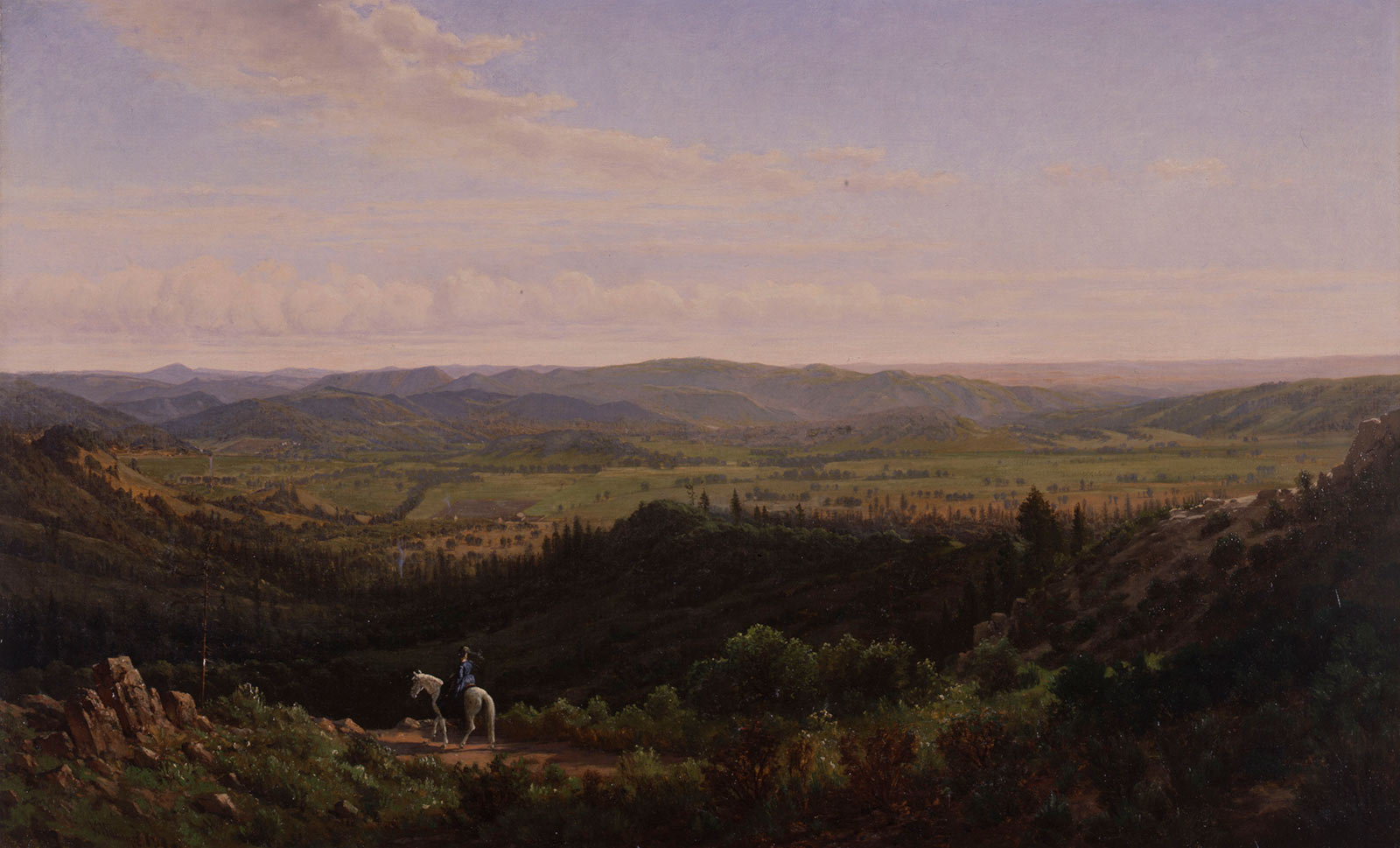 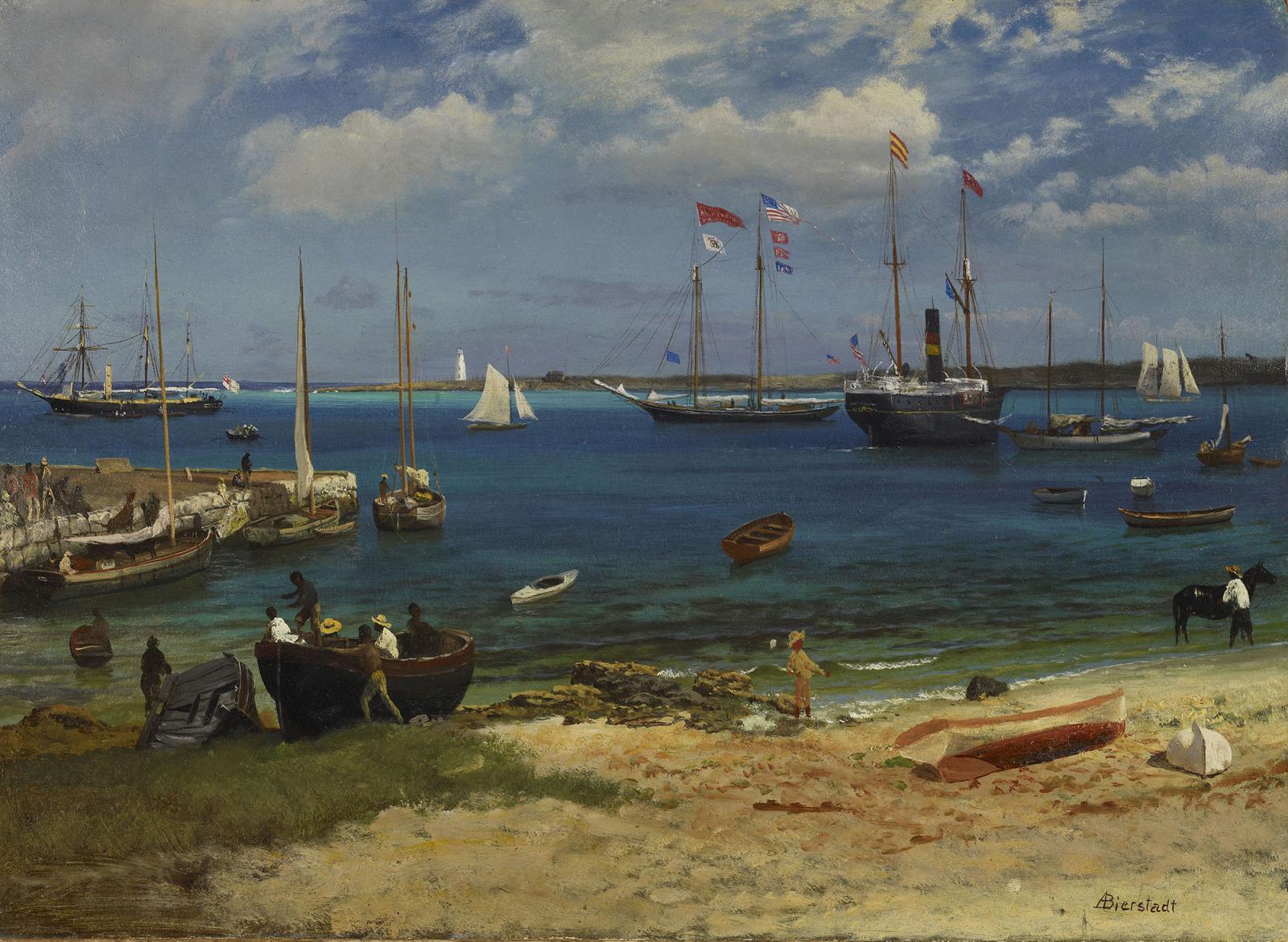 How can art heal?

Bierstadt‘s first wife, Rosalie, suffered from tuberculosis. Treatment consisted of rest and a warm climate, and Nassau, capital of the Bahamas, had both. Rosalie went there in 1877, and her husband visited as often as possible between his various painting trips. This scene was done during one of his visits. Bierstadt probably did most of the work on the spot, laying the brilliant blues and greens of the ocean with long strokes and dabbing in the sandy foreground with quick touches. 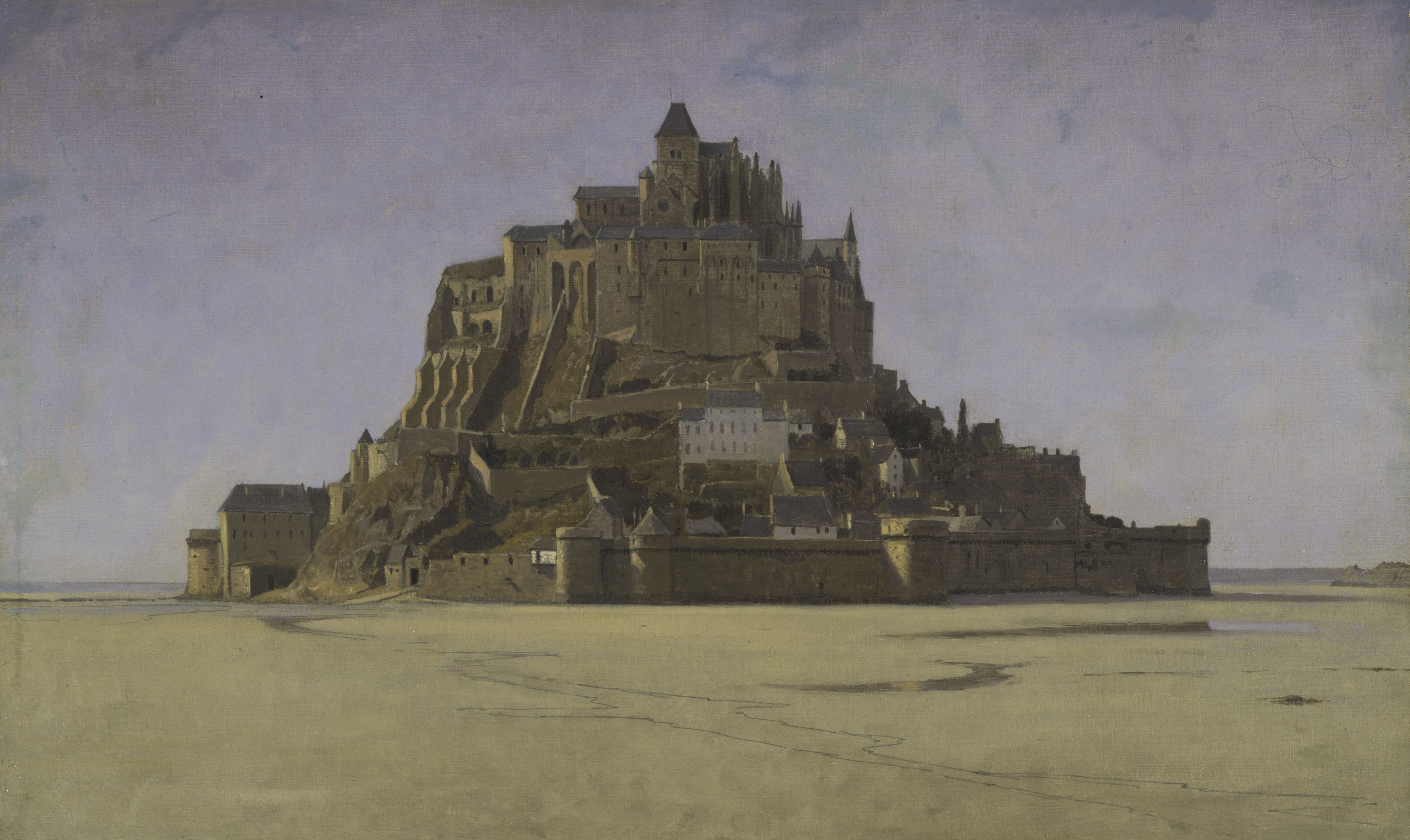 Where do you wish to travel?

Having studied art at the Düsseldorf Academy in Germany, Haseltine returned to Europe in 1866, funded by an auction of his work. He settled in Rome, painting mostly European subjects and exhibiting occasionally in the United States. This view depicts Mont Saint-Michel, a medieval abbey that sits atop a rocky island near the coasts of Normandy and Brittany. The abbey, which was constructed over 1,300 years, remains a popular tourist destination today.
Subscribe to